3 Ways to Cross-Train Between BJJ and Wrestling 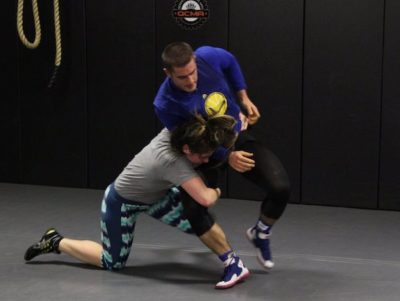 Brazilian Jiu-Jitsu and wrestling are both grappling martial arts with many similarities that create an overlap between these two sports. BJJ and wrestling both teach practical skills and are effective ways to increase fitness. Deciding which one is “better” is going to be up to you. But there is something to gain from BJJ if you are a wrestler and vice versa.

Wrestling is highly regarded for being a cross-training tool for athletes in other sports. It allows you to develop as a BJJ athlete in a variety of ways. Similarly, many of the techniques you learn in BJJ will make you a better wrestler.

So, here are a few ways that you can cross-train between BJJ and wrestling:

Just as you can train and build body awareness, you can also train and increase mat awareness. Mat awareness is essentially body awareness while on the mat. For wrestlers, the mat movements you learn in BJJ will increase your kinesthetic awareness. At the same time, BJJ introduces wrestlers to new scrambling moves and positions that challenge a wrestler’s athletic ability in new ways.

BJJ, known as “the gentle art,” takes a calmer, more strategic approach to training and competing. Rather than relying on brute strength, BJJ focuses on using leverage and performing efficient movements. On the other hand, wrestlers tend to bring strength, explosivity, and intensity – sometimes at the cost of efficiency. By training in BJJ, wrestlers learn to move smarter, with more efficient movements.

One of BJJ’s fundamental principles is that it’s a sport for anyone – any size, shape, or fitness level. Taking down an opponent comes more from strategy than strength. On the other hand, athletic skills like power and strength play a much more significant role in wrestling. A BJJ athlete who is focused on strategy and applying technique can still benefit from the conditioning and explosive power gained through wrestling. No other sport will have you as well-conditioned and strong as wrestling. At the same time, wrestlers who train BJJ will learn new movements and develop functional strength and fitness that they can take advantage of in wrestling.

To learn more about the programs and classes that we’re currently offering at Ascendant Martial Arts in Regina, contact us today.